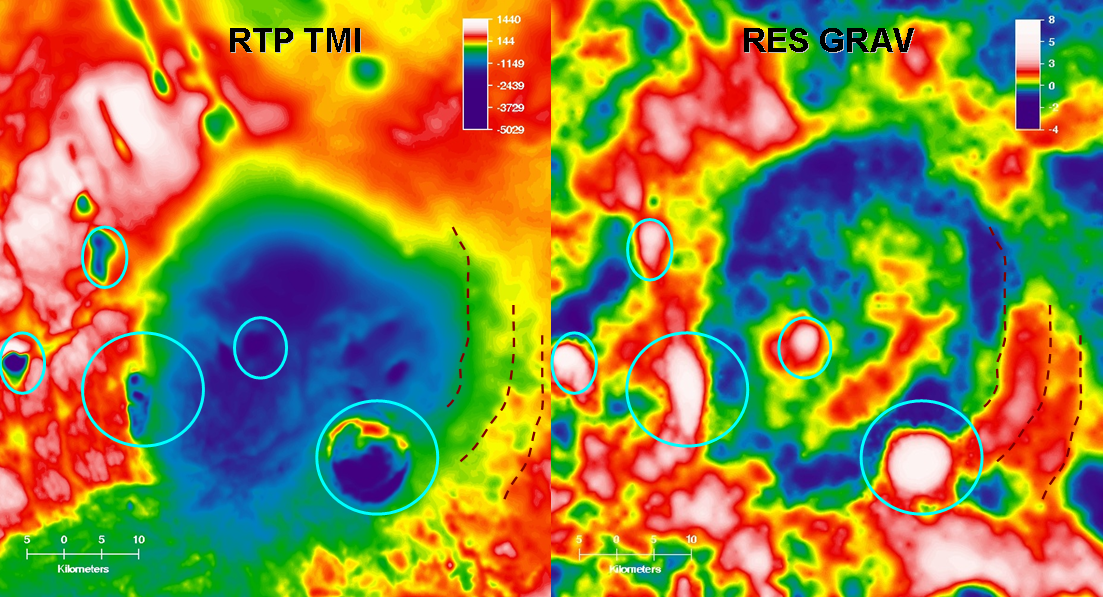 Hello Readers, after a recent break due to work commitments it's time for another article. Deviating momentarily from the Tensors theme, I am returning to the Coompana Anomaly in South Australia, about which I published an article in July 2016. At that time I was reporting on interesting findings from airborne magnetics flown in 2015. On the basis of that survey, the area was gazetted for exploration by the SA government and several EL's taken up to cover the main anomalies. Follow-up ground gravity survey work late last year covered much of the region at 1km station spacing, with some 500m infill. The dept of state development released the gravity data to the public in April 2017, so I am showing comparative results.

At the time of the first article, I speculated about the origin of the vast anomaly, and whether strongly remanent (reversed field in this case) preserved TMI anomalies might relate to mafic intrusions, and if they were genetically connected, and was there a connection to the greater anomaly. Gravity was viewed as the solution to resolve part of the question prior to exploratory drilling. Now that the data is available, we can compare the Residual Bouguer Gravity anomaly map on the right to the Reduced To Pole TMI map on the left.

Very pleasingly for explorers, there is a one-to-one relationship between the remanent magnetics anomalies and the the Bouguer Gravity. In fact the anomalies are very strong despite being under 250-300m of limestone, up to 6 mGals. This all but confirms that the rocks in the smaller anomalies are either mafic to ultramafic, very dense, or highly altered and also dense. Moreover, the infill only targeted 3 of these anomalies and many similar interesting features can be found in the region. However, what about the main 50-km wide negative anomaly? It is also shown to be a gravity low, not a high. This leaves the genesis of the anomaly open to question, but some remarks can be made.

The gravity reveals better structural details than the magnetics. It can be seen, both from the residual Bouguer image and others, that the main anomaly is ringed by arcuate structures which have different relief to the central anomaly. The smaller dense magnetic anomalies occur mainly on the first ring (though in the centre too), and dykes radiate from the central anomaly. Two possiblities exist. The gravity low is due to a gigantic collapsed caldera or diatreme, or it is indeed an impact structure similar to Sudbury where magmatic intrusions occurred post-impact on the outer ring of the structure. In either scenario, examination of the greater area shows it to be highly prospective for polymetallic deposits and kimberlite exploration.