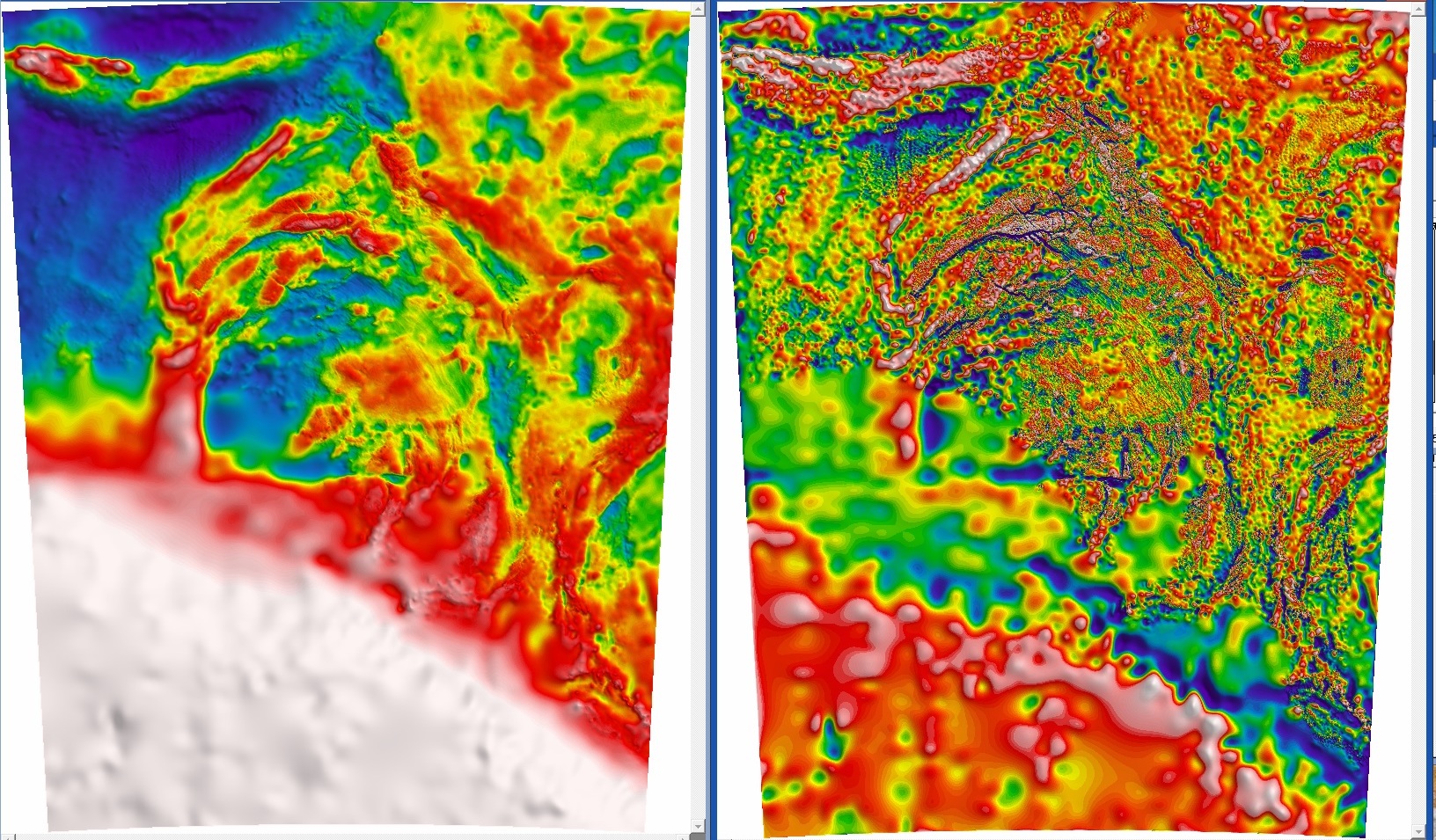 The next article in the Curvature and Gravity series takes us to standard images of gravity. The images shown are derived from a freshly (Oct 2016) gridded 100m cell-size grid of merged ground and marine Bouguer gravity data from South Australia.

Bouguer Gravity images are the most commonly used gravity image for interpretation. The "Bouguer" description references the fact that the variation in the gravity data is referenced to an imaginary slab of infinite extent and uniform density (2.67 grams per cubic centimetre) beneath every point on the grid. Given that we know the Earth is roughly spherical, and that rocks of all densities and types vary in the Crust, this is already an approximation over an area as large as South Australia. So high values in the grid (white and red) are referencing density changes greater than this value and low values (purple and blue) are referring to low densities. Futhermore, an image enhacement known as Histogram Equalisation is applied, ensuring that all values in the grid have equal colour representation, which helps show the variations in the data, if not the extreme anomalies. There is also a "sunshade" on the data, which helps show structural information present as a type of 3D effect and gives the image some texture.

What are the main advantages of the grid on the left, the Bouguer Gravity, and what is it telling us? The Bouguer Gravity shows us the whole crust gravity variations in milligals, or micrometres per second squared. These are small units of acceleration away from the Earth's average gravitational acceleration of 9.8 m/s2 The very large white area to the southwest shows us where continental crust becomes oceanic crust. The oceanic crust is much thinner and denser than continental crust, and closer in physical location to the high density Mantle. Continental Crust is made up a mixture of rock types, Igneous, Metamorphic, and Sedimentary. High density rocks (red and white areas) on land roughly correspond to ancient mafic igneous rocks and metamorphic rocks. Low density rocks (blue and purple) correspond mainly to sedimentary rocks in basins and low density igneous rocks such as granite. So we can see that the Bouguer Gravity (BG) is mapping a distribution of these rocks. On land, anyway. We can also see that the BG is also specified by sharp boundaries within it, by specific shapes and trends, which define Domains of various rock types, and correspond often to different tectonic periods as well. Finally we can also spy different textures in the image which correspond to gravity station density, as features are very sharply improved by the number of measurements over a given area.

So this is fine from a general classification or arm-waving perspective. What we can also see is that the broad regional variations (long wavelength) in colour in the BG influence or mask local trends and anomaly features, and don't always give the best impression on what is happening to the Earth structurally or where the strongest anomalies are. A First Vertical Deriviative image, such as the 1VD BG on the right, tells us about the change in the acceleration of gravity with respect to distance from the centre of the Earth. This has an effect of removing a lot of long wavelength trends and enhancing local variations in the geology, especially where strong and weak anomaly sources are. We also see the structure and textural changes leap into detail. We observe the changes in data density (lots of small changes eg on land surveys, compared to very few on marine), which also improve the visibility of some features, but can cause distortions if the data is of poor quality. Overall the 1VD BG is more exciting to look at and interpret, but we lose some of the regional classification value of the BG in interpreting this image. I'll continue this story in the next update in the series where I discuss further standard image enhancements.